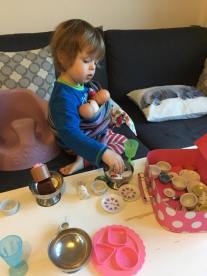 I had my daughter in 2015. I had never really heard of baby wearing, but as a solo mum I thought it might be something that could help. I went to my first Sling meet and never looked back! Baby wearing became a vital and wonderful tool in my parenting tool kit.

I went back to teaching when Eadie was 9 months old but decided it didn’t work for my family. I left teaching and set up Naturally Learning Childcare. As I childminder, I offer teacher-led, home-based, small-group childcare. I have always worked with children: for nearly 20 years I’ve worked with children as a teacher and nursery manager, in schools and nurseries, but I have never used baby wearing at work. Having experienced the positive effect it can have, baby wearing quickly became a key aspect of my care.

During settling I found out whether children were used to being worn. If they were, this was something I could continue. I found that this really helped form a strong attachment and helped to quickly reassure and calm the children.

It’s a very individual approach. One child I care for is frequently carried at home by both parents. When he started, the Lillebaby was an essential part of his settling in. It gave him a safe space to fall asleep in, it reassured him and also gave him an opportunity to watch what was going on from a distance.

Another child is used to being wrapped at home. When she started, her mum bought some of her wraps with her. I set up a little space on the sofa with the wraps, so she could snuggle when she needed a bit of reassurance. When she needed a cuddle she would give me the wrap, to show she wanted to be wrapped. This would really calm her down. She would often only stay in for a while and it seemed to give her a little boost.

I care for a maximum of three children so, from a practical point of view, I use a Lillebaby or a ringsling, to carry the third child, with the other two in a double buggy.

When I started childminding Eadie was nearly 2 years old. She found it hard to ‘share’ me, which was very understandable. I went back to a Sling Meet and talked to Carol about a Toddler carrier. We borrowed a Toddler Beco, but I didn’t get on with it. The following month we borrowed a Lillebaby Carry On and loved it. I then bought a new one from Carol. The Lillebaby Carry On gave me the opportunity to reassure Eadie. When we went on walks, the babies could go in the buggy and she could have some special time in the carrier.

I use it regularly now when it’s just the two of us too. I love how baby wearing has become a journey – different slings and carriers suit you and your family at different times! That’s why, for me, the Sling Library has been invaluable. I am always in awe that it’s run totally on a voluntary basis. Carol and the peer supporters give up so much of their time to share the baby wearing love! I will always be grateful for their help. I love the role that baby wearing has played in my family and at work.