“What is that you are using?” 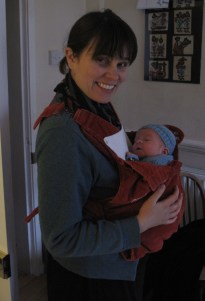 Have you heard this comment when out and about with your baby in a carrier? It is still surprising how many comments babywearers receive when shopping , on the bus or at the school gate. I suspect many of  you will have been stopped more than once by a passer by. Some who comment will wish that they had been able to carry their babies ,others will be suspicious and see it as a new fashion or trend and will be mistrustful and suspicious.

Strange though it may seem to those that comment, baby carriers are all based on designs that have been around for centuries. Until a relatively short time ago in man’s history using a baby carrier was the norm in Europe as well as America, Asia and Africa. The period of time in which European and American babies have not been worn, is really very short in the scheme of things. When baby carriages were invented in 1730 they were certainly not for ordinary people, the Duke of Devonshire commissioned the first one from William Kent and was a horse drawn affair. Silver Cross began production in 1877 of their carriage prams and their patented designs became the start of prams as we know them. Queen Victoria helped to make baby carraiges popular,  but they were very much used by the upper classes as they were still very expensive items.   By the 1900s the ‘pram’ was becoming more common place and carrying was on the decline.

When Maclaren brought out his lightweight, folding buggies mother’s were delighted with the sudden freedom this gave them. Women could get out and about with baby on public transport and in cars. Women who lived in flats didn’t have to bounce heavy prams up and down stairs. Easier though this new wave of strollers were, they were never going to be as convenient as baby carriers. Many families still craved greater convenience and flexibility and carriers such as the Snugli carrier and the Didymos wraps were launched in the late 60’s and early 70’s to meet this desire. The wheel had turned and mothers [and fathers] were once more carrying their babies. So in carrying babies today we are not doing something new, but returning to something both simple and functional.

But whilst babywearing is not new, it is not something that most of our grandparents knew anything about and indeed few of our mothers will have carried either.  Very few communities continued to do it through the early 1900’s. The Welsh carrying shawl being one of the few traditional carriers that survived in the UK during this time.

The world of babywearing is now changing rapidly with new carriers coming on the market regularly, but babywearing is still not second nature to us. In order for it to become this we would have had to be worn, or seen mothers all around us wearing their babies as we were growing up, or have even worn our younger siblings.  Today’s generation of parents is reclaiming an age old art. Sling libraries, sling consultants and friends who carry, are taking the place of the lost generations of parents who were not carriers, to instruct new parents in that art.

For the next generation it will be easier . They are are already wearing their baby dolls, and some of them are wearing their siblings. They see carrying as the norm. Hopefully the tide will gradually turn and babywearing will become what parents do instinctively, in order to provide good care and closeness for their babies.